Enter my family. I traveled up to Viña del Mar, on the coast in Chile to meet up with my Aunts Patty and Peggy and my Uncle Tim. One word to describe our next ten days. Laughter.

The laughter started immediately as we spent a morning/afternoon in the sun on a terrace overlooking the ocean, taking in the popular Pisco Sour cocktail, in an “it’s 5:00 somewhere” kind of moment.

The first night was the main event though. My cousin’s friend Jimmy (who from here on out will be called Yeemy, to spell it as pronounced in Spanish) had studied in Viña del Mar and lived with a family there. Yeemy insisted that we go see this family, and we would later find out he had barraged them with emails about us as well. I don’t mean to give Yeemy a hard time. I don’t even know him! I feel like I do though, after such a wonderful night of stories that elevated him to sainthood.

I digress. We decided it was best if I exchange emails with Marcia, “the Mom”, as my relatives do not speak Spanish and the family doesn’t really speak English. That evening we receive an email telling us to come to their home at 10:00pm.

My relatives: “Wow that is late to start a night.”

Me: “Not really, that is normal for here.”

Tias/Tio: “Well we’ll just stop in for a quick drink, just to meet them, just to say hello.”

Tias/Tio: “Noooo. Really? Did they say that in the email?”

We arrive to their home, coming prepared with Spanish names for each of us.

Me: Ariana, which people call me here when they can’t pronounce or understand Erin.

Peggy: Margarita (Not just because she likes to drink em, Peggy is short for Margaret)

Tim: Jose (wait, what? His middle name is Joseph and on the rental car form it was cut off to just say “Jose”, and so we decided he’d go by Jose, which worked until he forget he was Jose. More on that later.)

They come out to greet us, Marcia, her husband Bernardo, and their daughter Andrea. Huge, strong hugs and kisses on the cheek all around, and everyone immediately begins compensating for lack of shared language with laughter and volume. You know the trick, when someone doesn’t understand you just speak slower and louder, wink wink. I tried to ready my mind for translating with game-day style jitters. Hug, kiss, deep breath…here we go!

They invited us into the dining room, which had a beautiful royal blue table cloth spread across the table with bright red flowers that they proudly told us were the country’s national flower. They had platters of beef, cheese, crackers, fruit, and pitchers of homemade pisco sours with freshly hand-whipped merengue rimmed glasses. We already had a bottle of wine ahead of time as we were a bit nervous and excited with anticipation of this cultural immersion on night 1. So now with added piscos and the desire to communicate, it turned into a rather rowdy conversation. 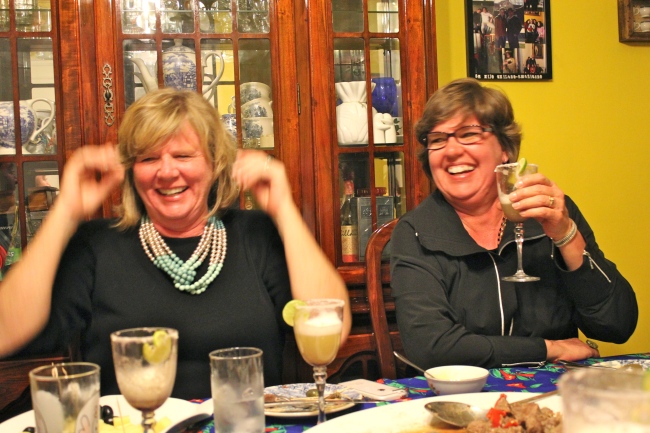 Tim/Jose heard someone call him Jose and mistook it for someone talking to Bernardo. So Jose is calling Bernardo “Jose”, my aunts switch to calling Jose “Timoteo”, finally Bernardo clarifies his name is Bernardo and Jose turns to me and says, “Why did you tell me his name was Jose?” “Um, I didn’t Jose. You’re Jose tonight.” I would say something to the family in Spanish, and Patricia, Margarita, and Jose would want to know what and then everyone would have a response to everyone. “Tell her this!” “Ask him that” “What did they say?!” It was the most extreme mental gymnastics of my brain-usage career and wildly entertaining. I loved every minute. I would pay millions if we could’ve had a Go Pro mounted on the wall filming it all. And in reality, hand motions, facial expressions, laughter, and even volume made for a language that everyone could understand.

They told us about a ranch they have outside of the city with twenty horses, and of course an invitation was extended. We also were extended an invitation for a helicopter ride, Andrea’s husband is in the coast guard (Or navy. I think. Point is, he has access to a helicopter). I will have to return to take them up on those offers another time! For now, they brought out traditional ponchos and hats for a little game of estancia dress-up to finish off the night. Photos were taken, hugs were exchanged. I felt like they were hugging me with their whole life, saying things like “Dear! Sweetheart! You are family now. I love you. My daughter. My life.” I am not exaggerating. It does not get sweeter than this. 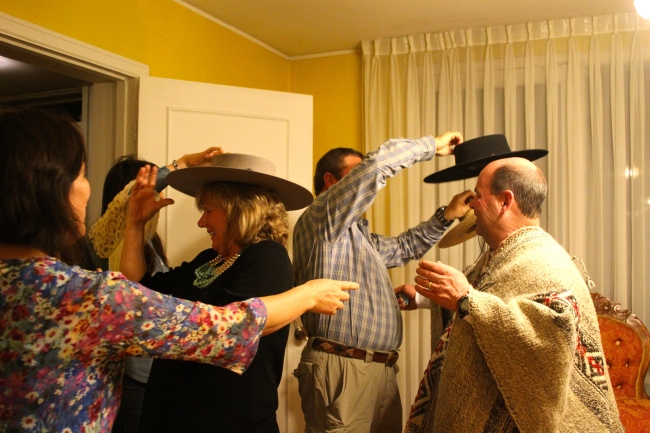 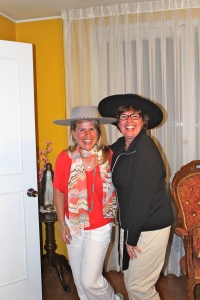 Here I was thinking I was so lucky to have my own family to be here visiting me and then we acquire a whole new Chilean family the first night they are here. Margarita said that she is forever changed after that night, the love and generosity from strangers who became family in a matter of hours. Priceless. 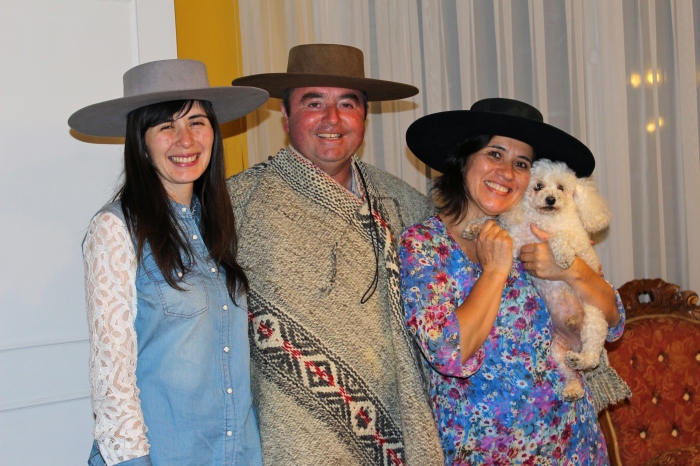